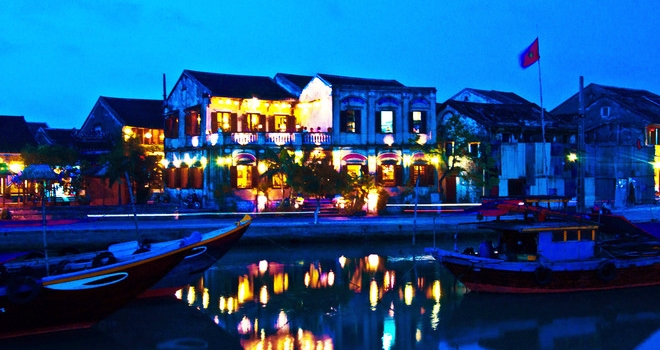 Less people think visiting Vietnam without Hanoi and Saigon. Why not ? We have some daily direct flights from Siem Reap, Taipei, Guangzhou and Incheon, or by Air Asia linking Kuala Lumpur and Da Nang. Forget Hanoi and Saigon, if you just spend your short vacation in Vietnam Central Coastline with 3 UNESCO World Cultural Heritages, you can book this tour.

Pick up you at your hotel at around 8:00am and then take a full day to discover Hue: visit Emperor Minh Mang; Emperor Khai Dinh and Emperor Tu Duc’s Mausoleums & Vong Canh Hill. Stop on the way to see how conical hats and incense sticks are made. Lunch at a local restaurant.

In the afternoon, visit Imperial capital during Nguyen Dynasty, the seven – storey Thien Mu Pagoda on the riverbank. Return by boat on the gentle Perfume River .

Lunch between visits. Overnight in Hue.

Breakfast and check out your hotel in Hue at 9:00. Private transfer to My Son in Quang Nam province.

My Son Holy Land is a unique beautiful sanctuary world of the ancient Champa empire from the 7th century – the 17th century, is day by day attracting thousands of tourists elsewhere. Honorably recognized as a World Heritage in 1999, My Son Holy Land is captivating in various cultural values. Therefore, it is extremely useful and meaningful for those interested in Southeast Asian culture, which owes its core to ancient Cham culture, to drop off the land. Although time and the wars have destroyed some towers, the remaining sculptural and architectural remnants still reflect the style and history of the art of the Cham people. Their masterpieces mark a glorious time for the architecture and culture of the Cham, as well as of Southeast Asia.

In the late afternoon, you will be driven to Hoi An Old quarter. Check in your hotel. Overnight in Hoi An.

At 9:00 am, the guide welcome you at hotel lobby. Walk to the old town, buy entrance tickets and begin the tour. Start visiting the Temple Kwan, Phuc Kien Temple, Tan Ky Ancient House, Phung Hung house, Japanese Bridge and cultural show rooms in Hoi An. Lunch is arranged at a local restaurant.

In the afternoon, you’re transferred to a local farm in Tra Que village ranked No.1 of Hoi An attractions on TripAdvisor.com from 2007 to 2012. A short stroll will take you around the vegetable garden and then you can join the farmers in preparing the land and fertilizing it with seaweed from thelocal lake. following steps are raking the ground, sowing, watering, picking vegetables and many other gardening activities.

Around 17.00: bid farewell to your host family before driving back to Hoi An, on the way back we will stop at Japanese tomb. Free leisure & overnight in Hoi An.

Breakfast then free leisure. Check out the hotel at 12:00 noon then private transfer (no tour guide) to Da Nang international airport for your departure flights. End of services.

Some DIRECT international flights from/ to Da Nang airport (DAD):

DURING TOUR
We should not compare Hue Imperial Closure with the Chinese Kings’ palaces. Indeed, Vietnam is a small country vs. the giant neighbour but Vietnam has its own tradition. Every archiectures of Vietnam is small but charm, like Vietnamese people usually say “Vietnam, the hidden charm”. In contrast, China style is something “huge”, “imposing” and often “to show off”.

Should not compare My Son Holy Land with Siem Reap Angkor temples. Each site symbols for an independent empire. In Vietnam, it’s Champa vibrant kingdom dominating Central Vietnam from the 5th to the 17th century, while Angkor wonders is the ancient capital of Khmer people until the 15th century only. My Son is “the only evidence of a lost empire in South East Asia”, the reason why UNESCO recognises it as a World heritage.

Tra Que herb village, 4km on the outskirts of Hoi An, is a must for who loves this countryside old town. Because most tours bring tourists to the village in the morning, we arrange your sightseeings in the afternoon to avoid noise and touristic atmosphere.