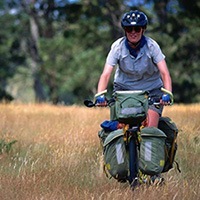 There’s no better way to explore a place than by bike. In honour of our favourite two-wheeled travel companion, here are 10 world’s best cycling trips that should be on every cyclist’s wishlist.

The Isle of Wight is a cycling paradise that is home to some of the UK’s most varied terrain: lush velvet hills rolling into the sea, narrow lanes through tidy hedgerows, deep and mysterious green gullies, and the island’s most striking feature, the ridge of white chalk cliffs stretching across its breadth. Although cyclists have been enjoying its outdoor pleasures for decades now, it’s only been in recent years that Wight has started to attract young and trendy Londoners looking for a romantic weekend by the sea with a buzz – which gastropubs, slick hotels and a calendar full of festivals now provide.

Wightlink passenger ferries sail from Portsmouth to Ryde pier throughout the day; fares vary for the 18-minute crossing but bikes are free.

By right, Tasmania should be too small to have huge pockets of wilderness, but untouched and untamed lands stretch along its fierce west coast. Cycling land this wild should not come easily and it doesn’t, with the hill climbs queuing one after the other – you will notice them but not as much as the scenery, which takes in Tasmania’s most famous mountain (Cradle Mountain), its cutest coastal town (Strahan), its highest waterfall (Montezuma Falls) and its most beautiful lake (Lake St Clair), all on highways that feel at times like back roads.

Tasmania is covered in detail in an excellent series of four maps produced by the state government’s Information and Land Services Division.

Tackling hilly Luberon with a touring load might seem crazy, but several hundred kilometres of well-signed bike paths render it very enjoyable, as do ancient Roman ruins, medieval chateaux and ambrosial wines. This sun-drenched corner of Provence is a mix of manicured vineyards and ancient villages tumbling haphazardly down rocky slopes. Cool pine forests and blue fields of lavender stretch away on either side of the road. But the real goal here is legendary Mont Ventoux, scene of several Tour de France dramas, dominating the landscape and silently luring cyclist pilgrims to its summit.

Mont Ventoux is usually snow-covered above 1300m from December until May. The summit road is accessible only during the summer months.

The ferry conveying you and your trusty steed from Seattle or Anacortes weaves its way calmly, the perfect introduction to the slow, peaceful character of these islands. Awaiting you are forested shorelines, secluded coves, bucolic vistas and quiet roads. The three largest islands, Lopez, Orcas and San Juan, each have their own distinctive charm, with historic sites and art galleries. The terrain is hilly, but each can be cycled in a day, including plenty of time to watch for seals, otters, sea lions and the odd orca, or black-tailed deer and eagles further inland.

Washington State Ferries provides the main transport link between Anacortes and the islands. The Victoria Clipper runs from Seattle to Friday Harbor.

Beginning in fertile lowlands flanking the Shannon estuary, this route rolls past golden-sand beaches to the dramatic Cliffs of Moher facing the Atlantic. Next come the music hotbed towns of Milltown Malbay and Doolin, where you enter a pub only if you’re in for the long haul – leaving before the last song is sung seems a monstrous breach of etiquette. From here progress to the relentlessly grey, yet captivating, limestone expanse of the Burren, reminiscent of a lunar landscape. Then take a sojourn into Yeats’ country before sauntering back in a loop through County Clare’s gentle patchwork countryside.

May and June are best for wildflowers in the Burren, while some accommodation opens only from June to August. Book well ahead during July and August.

Fascinating Cuba is a delight at helmet level. Try the spectacular 9km descent along the La Farola highway, from the crest of the Baracoa Mountains down to the south coast. The highway clings to cliffs hung in tropical vegetation, with guard rails protecting you from drop-to-nowhere gorges, before sweeping from one giant limestone ledge to the next, each turn providing a closer vista of wild open ocean. Built by the Revolutionary government, this magnificent mountain highway is an irresistible challenge for cyclists. Traditionally, the first stage of the Vuelta Ciclista Cuba (Cuba’s answer to the Tour de France) is run over this route.

Food options are minimal: be prepared to eat out of your panniers. It’s also essential to carry your own bike equipment and first-aid supplies. This iconic road runs the length of the narrow country from north to south. It is the most popular cycling route in Vietnam, a long but immensely rewarding trip along the best parts of Vietnam’s coastline. The route has some reasonable hills, climaxing in the mighty Hai Van Pass (496m) – with a breathtaking descent as pine-clad mountains loom to the west and the South China Sea vanishes into the east. Take the time along the way to gaze at networks of lush rice fields blanketing the hidden valleys below; fish, snorkel or dive the turquoise waters of the coast; and soak up the atmosphere of delightful rural hamlets.

Check out Cycling tour on the National Highway 1, Vietnam

With the first half decidedly laid-back and the second portion anything but, the mix of scenery and sweat make this one of the best one-day rides in the country. Starting from university-town Dunedin you soon shed the trappings of the city and succumb to the lure of the open road. The serpentine route twists pleasantly along the shore, providing tremendous ocean views, and the terrain is made for cycling. Then suddenly there’s a sharp turn to the right and you’re gaining altitude like a climbing fighter-jet. Get ready for steep climbs, fast descents and the odd albatross to keep you company. The route should be negotiable year-round whenever conditions are dry. However, you’re less likely to suffer frozen extremities on descents outside June to August.

This justifiably renowned cycling route is best-known for the scenery – breathtaking rocky coastlines, the crystal clear Bras d’Or inland sea and the soaring ridges of the Cape Breton Highlands – especially in their autumn colours. But adventure-seekers will also be satisfied as gently rolling hills become invigorating mountains with some tough climbs and heart-thumping descents. Combined with local wildlife (such as beavers, moose and deer), quaint fishing villages, an intriguing Gaelic culture grown from French-Scottish roots and plenty of fresh ocean breezes, Cape Breton is the whole package.

By cycling the often overlooked, yet spectacular, far reaches of the northeast corner of Italy, you have the opportunity to intimately discover this earthy region. Along roads that make for easy pedalling, Slovenian farmers tend their fields in the strong sun, rows of vines cling to voluptuous hill country, and you smell the freshly tilled earth and feel the wind cool the sweat from your face. Then in the evenings, relax in a piazza to sample the region’s famous white wines and join the laidback locals for a chat. The route’s icing on the cake is the final scenic jaunt down the Istrian coast.

Want more inspiration? Check out our articles on cycling in Germany and Italy.

Published on 01 May 2012 by Lonely Planet. Source:http://www.lonelyplanet.com/australia/travel-tips-and-articles/75502#ixzz2xtmggG00