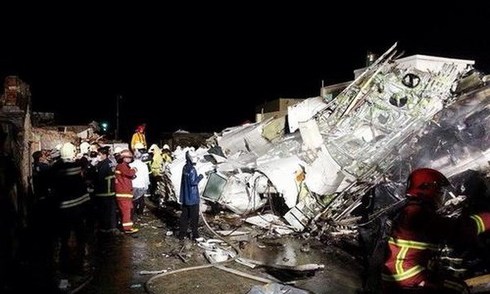 “TRANSASIA PLANE CRASH IN TAIWAN: 51 DEATH 2 HOURS AGO”: Apart from 2 big Boeing MH, there are dozens of “small” down everywhere, from Taiwan to Vietnam, Laos, Cambodia (2 General died last week)… Early this year has Crimea trouble, Sewol swink, Vietnam – China conflict off-shore… this year is abundant of trouble… Must be enough !!!!!!! From now to the end 2014, please leave everything behind and travel ons. TransAsia Airways plane faces the trouble with Matmo typhoon. The plan is trying to land twice urgently because of the typhoon, but the accident happens.

From Taipei, Reuters reports a TransAsia Airways turboprop plane crashed on its second attempt at landing during a thunderstorm on an island off Taiwan on Wednesday, killing 51 people and setting buildings on fire. 11 injured passengers on the plane were taken to hospital. This is ATR-72 plane with capacity of 70 seats. TransAsia fleet has 23 planes, focusing in the short and medium flight route from Taipei to Hong Kong, Macau, the Phillippines and Siem Reap. This is the 6th accident TransAsia has face since 2002. Position of the island of Makong (Point A in red), where the TranAsia plane crashed 2 hours ago. The island is between Taipei and China.

In the recent 2 months, there are many tragedies witnessed all around the world. In late May, 2 Deputy Prime minister of Laos PDR with 11 General passed away when their plane fell down in Xieng Khouang. Early this month, a helicopter Mi-17 was down during their joint-operation in Hoa Lac, 11km West of Hanoi, 11 Vietnamese military servants died. Last week, MH17 Malaysia Airlines hit the unknown missile in Ukraine. Since March, MH370 plane has been still missing.