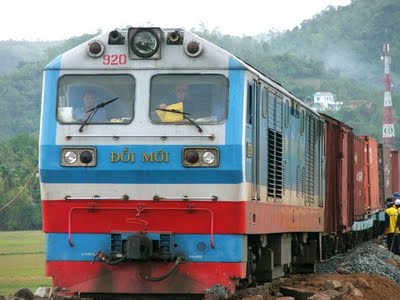 After first time using train from Hanoi to Sapa, some clients complained that the trains are noisy, fluctuated during running and they couldn’t sleep. Although we raise some warnings before their Sapa tours, they’re still rather disappointed. They’re right, but we have no better choices, and our mission is to emphasize the disadvantages of the trains Hanoi – Lao Cai again.

Railways in Vietnam has a long history since late 1800s under French colonism. In 1881, the first 13km was launched in Saigon – Cho Lon town (Ho Chi Minh city nowadays) adapting the train gauge of 1-meter wide. The next 100 years are the period of wars preventing the local governments from upgrading the railway system. In 2011, Vietnam government planned an ambitious project to build a new rail system with higher speed and double capacity, but it’s too pricy due to high inflation and longer loans hence the red light was hinted. The size of rail width is now still outdated the same to 1881, while the rest of the world paced their advance after the World War 2. Vietnam (purple) is among the small number of coutries still introducing the rail gauge of 1 meter, while most countries are using 1.5 meter or 2 meter gauge.

Narrow gauge makes fluctuation. Hanoi – Sapa is 1,500m elevation difference and the train to Sapa is not stable when it’s turning or going uphills. The steel wheels to rub the rail directly without vacuum buffer (as in Europe) makes noise louder.

Train is now still the best transportation from Hanoi to Sapa

Updated: At the time of writing this article in May 2014, this was correct, but since September 2014, a new highway from Hanoi to Sapa was inagurated which shortens the driving time into 5 hours. Since then, tourist bus is number 1 choice for travelers from Hanoi to Sapa and vice versa. You can book us bus tickets Hanoi – Sapa, too.

We have 2 options for Hanoi – Sapa transportation: Public bus & Train. Most clients agree with us Bus is even not good as train. It’s also a 10-hour journey and clining sleeper on bus is even more difficult to sleep than the flat sleeper on train. Bus must be better if the highway Hanoi – Lao Cai is completed in 2016 but at the moment, train is the 1st choice for travelers to Sapa.

Actually, Vietnamese have many efforts to improve what they can improve. Before 2007, there are only state-run trains (code SP) operating on the route Hanoi – Sapa. In 2007, the 1st tourist train Livitrans was introduced to market. In fact, it was 1 train compartment attached to the state-run train to Sapa, and 1 other compartment attached to the vice versa train to Hanoi, but they’re facilitated especially for tourists with wooden wall to reduce noise from outside, soft-sleepers with bed-lamp, complimentary mineral water, panoramic windows for sightseeings and at least 1 English speaking staff on each compartment. It’s still noisy, but less than usual, and now the service is similar to a 3-star hotel room. Since 2007, there are other 9 train operators for tourists to launch into market: Victoria, Tulico, ET-Pumpkin, KingExpress, Fansipan, Sapaly, Ratraco, OrientExpress, GreenTrain.

Trains to Sapa are nearly similar to each other

Some luxury travelers choose Victoria or Sapaly but they don’t know the truth that Victoria has no remarkable difference to others apart from sky-high ticket price. Victoria is actually still 1 compartment attached to the state-run train SP1 & SP2. This means Victoria runs on the same train gauge as other trains and face the same issues of noise and fluctuation. The gauge determines the size of compartment and the size of sleeper. Victoria is not an exception with the sleepers of 1m80 length as the same to KingExpress or Ratraco, the low-cost ones. Bed settings are the same. English speaking staff is the same. Wooden walls are similar. The only difference is the dining carriage which is next to the Livitrans compartment, but it’s not important because you can have dinner in restaurants near the Railway stations before the train departs. In our experience, the food in restaurants is much better than on the dining carriage.

Be advised the price difference is huge – 1 Victoria train ticket/1 way costs around US$ 220/person, more pricy than a room night in Sofitel Metropole Hanoi hotel and similar to a Halong – Cat Ba 4-day tour price. Sapaly train costs around US$ 55/person/ 1-way ticket nearly the same to a trip to Mai Chau valley 2 Days overnight in homestay. It’s wise to book a cheaper train at the similar service standard. That’s why VietnamCheapPackages usually recommend KingExpress or Livitrans as the favourite choices for train journey to Sapa.

We care your train from Hanoi to Sapa journey

Let us care your train tickets from Hanoi to Sapa. Book the train tickets and you’ll receive the train vouchers within 6 hours if you’re in Hanoi. The ticket costs US$ 35 – 40/person/1-way upon the train brand. We’ll email you the train vouchers or Free delivery if you’re staying in Hanoi Old quarter. Once you request, we can arrange 1 supporting guide who will go with you to the Railway ground, helping you get the boarding pass and escorting you to your bed on train! So you won’t do anything apart from booking and paying.

The above fare of US$ 35 – 40/person is for a 4-soft-sleeper train compartment you share with other 3 passengers. If you want to occupy a private compartment, we recommend you should book the rest tickets. E.g. 2 of you staying in a Private compartment so you have to buy the rest 2 vacant sleepers. And VietnamCheapPackages can arrange this even in last minutes.