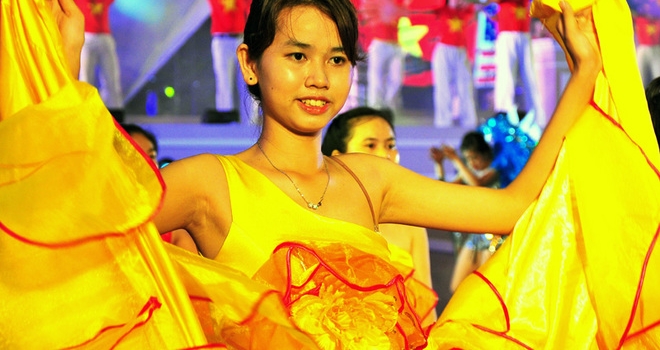 Held biannually since 2003, Nha Trang Beach Festival is one of the most outstanding events of Khanh Hoa tourism to introduce and honor sea-island culture values as well as economy, culture and tourism potentials and strengths of Nha Trang City and Khanh Hoa Province.

On the night of 12 July, the street festival, a part of Nha Trang beach festival 2015, was held on the main streets and the central square “2nd April” with full of music, dance, national flags on the blue theme of Nha Trang beach.

The street shows present the spledid beauty of Nha Trang beach and hundreds of islands which are gems among the ocean.

The children of the sea opens their arms to welcome visitors to Nha Trang beach.

Nha Trang beach festival 2015 connects the past and the presence, the old and the modern in a diversified tourism world.

The Vietnam navy guards the hometown of Nha Trang throughout Vietnam history chapters.

Nha Trang Beach Festival 2015 ends by firework launchers. The Festival 2015 closing ceremony on Nha Trang beach is the signal of a new boom of Nha Trang tourism, both for domestic and foreigners.