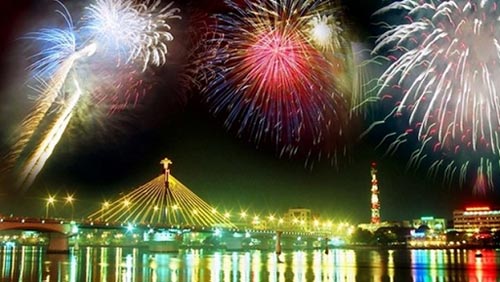 Da Nang city is in the mid-way from Hanoi to Ho Chi Minh city. Its mood is also in the middle of both cities, half is busy and dynamic like Ho Chi Minh, half is relaxable and sometimes introvert like Hanoi. Different from Hanoi and Ho Chi Minh, Da Nang city has 3 nice beaches, which lures every travelers at the first sight. That’s why many visitors are ready to ignore Hanoi and Ho Chi Minh to visit Da Nang in their short trip. In fact, direct flights from Malaysia, Singapore, Siem Reap and Seoul have made Da Nang busiest always.

How Da Nang city attracts visitors on the upcoming Vietnam National Day ? Find out the new things to do that this city will bring us next week.

1. Fireworks performance from boats on Night of 2-September Firework launchers in Da Nang is expected to be beautiful as the recent fireworks to celebrate Singapore the 50th Independence Day.

Firstly it was designed to launch from helicopters, but because it’s not tested before, the local government changed their mind. Fireworks launching from boats is not new to Da Nang fireworks expert. They won the prize in Vancouver last year while using this technique.

The best venue to contemplate the event is the roads from Han river bridge to Thuan Phuoc bridge. Artful fireworks are launched from the boats in the middle of Han river. Da Nang Light Festival 2015 (DLF 2015) is first time organized in Da Nang. It was re-scheduled from April to September to avouid the tight schedule of many events in Da Nang in April.

This is the first time Da Nang city holds this event with the help from The Global 2000, a Malaysian event organizer. DILF 2015 lasts from 4 – 6 September on Bach Dang street, and the 36-storey Novotel Da Nang hotel will be the main stage of light performance. DILF 2015 includes light performance by multimedia, music events and a light performance contest. The most highlight is the huge lamp in the shape of Vietnamese long-tail dress colored by thousands of LED in different effects. On 30 August, the International Marathon in the theme of “Peace Running” will be hold on the streets of Hoang Sa, Vo Nguyen Giap, Truong Sa and several surrounding streets in Da Nang city center. It’s expected to attract 5,000 – 6,000 athletes from all grades as well as tourists to attend.