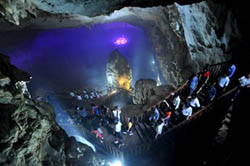 Phong Nha-Ke Bang National park, the UNESCO World Heritage site, is the World’s 2nd largest karst regions with 300 caves, grottoes and total length of 70km, also protecting the ecosystem of limestone forest in north central coast of Vietnam. Lying among the National park, Thien Duong “Paradise” cave was newly found in 2005, took the title “the world’s longest cave” from Phong Nha cave and lures everyone by its diversity of rock formations inside.

Start from the meeting point in Dong Hoi inner city, Quang Binh. Please contact us to know where it is when you book.

End at your hotel in Dong Hoi city, Quang Binh. At around 7:00am, our shuttle bus and English speaking tour guide welcome you at the bus stop.

8:00 Start the journey to visit Phong Nha majestic and mysterious are many scientists around the world interested in the study. You go boating on the river Son to visit the Phong Nha (Hang In, cave In, Repulse cave, cave Imperial, Bi Ki)

11:00 Have lunch in a local restaurant in Phong Nha.

At around 18:00 end of services at your hotel in Dong Hoi city. Phong Nha-Ke Bang National Park contains the oldest major karst area in Asia. Protecting those caves is the reason for the park and also why it was named a UNESCO World Heritage Site. This cave is called Thien Duong (Động Thiên Đường) and is over 19 miles (31 km) long. The British cave explorers were so impressed by the beauty of the rock formation inside the cave, they dubbed this place as “Paradise Cave.” Photo by Vo Thanh Lam.

According to World Wildlife Foundation report in 2000, Phong Nha-Ke Bang National Park is one of 200 biodiversity centres of the world and one of the 60 significant sanctuaries of Vietnam. It has a unique forest type in the world: green tropical forest. The park also has 15 other types of forests. The national park was created to protect one of the world’s two largest karst regions with 300 caves and grottoes.

In January 2009, the United States-based Los Angeles Times listed Phong Nha-Ke Bang National Park in its recommended world’s 29 destinations to visit in 2009. For who loves adventure, you can choose our private tour with 1 night staying inside the Park.

Phong Nha cave is over 5km long and was once upon a time “the biggest cave of Vietnam”. In 2005, Thien Duong “Paradise” cave was found and 31km long, taking the titlle from Phong Nha and above of all, it’s also “the World’s Largest Cave” with 100m height and 150m wide. 4 years later, this title was handover once again to Son Doong cave when experts from British Caving Association discovered this new cave with total length of 56km, 200m height and 150m wide.

Until now, tourists can only explore 11 km of Thien Duong “Paradise” cave and no-one can get inside Son Doong cave because it’s too new even to the local people apart from 2 Vietnamese joining with British Cave Association experts in 2009 and 2010. Now the only way to get inside is roping down from the vault.

The best time to visit the 3 caves is from November to April (dry season) to avoid the rising water level of underground rivers inside the Phong Nha caves.