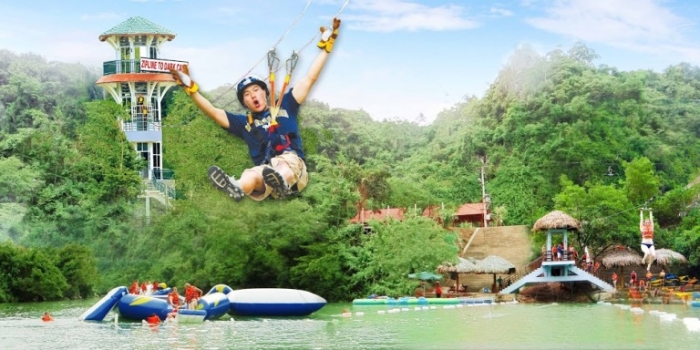 Please enter a valid URL and content for your button.

This group tour suits for fans of easy adventures. Walk along 2 km inside the impressive Hang Thien Duong (Paradise Cave) which discovered by scientists of the British Caving Research Association in 2005, the longest dry cave in Asia. Take short kayaking at the center of Phong Nha national park, the largest NP of Vietnam. Travelers also have the chance to zip line and swim on Chay river. Dark cave is a true experience where visitors can walk and swim inside the cave. It is fantastic for someone who joins in tour to see the limestone formation and a lot of fossils inside. Dong Thien Duong (Paradise cave) was newly discovered in 2005, and opened to tourists since 2009. This is the World’s longest cave (31km).

7:30 – 8:00am: Our shuttle bus and tour guide will pick up guests at hotel in Dong Hoi city (or in Phong Nha town 30 minutes later), you will explore Dark cave (located in Phong Nha – Ke Bang National Park, 20km about Phong Nha cave, 65 km about Dong Hoi and 1h10 minutes driving).

Dark cave was the true experience, kayaking and ziplining over the river to get there, walking through the dark with only the head touch on your mining helmet, having a mud fight in the mud baths deep in the cave and then washing clean with a swim in the lake inside the cave. Picnic lunch in Dark cave (included in our tour) Phong Nha – Ke Bang is called “The Kingdom of the caves” with over 1000 large and small caves, including Son Doong cave – the largest cave in the world. Phong Nha – Ke Bang National Park was recognized as World Natural Heritage in July 2003 by UNESSCO with its values of gelogy and geomorphology.

Paradise cave was discovered by a local man named Ho Khanh. In 2005, British explorers led by Howard Limbert then explored the cave and stated that it is 31.4km long, with width from 30-100 metres wide, with the widest point measuring 150 metres and the height of around 60m. It is considered the longest dry cave in Asia. Ho Khanh and Howard Limbert are also who discovered Son Doong, the World’s biggest cave. Experts said that Paradise cave is more beautiful than Phong Nha cave, which used to be the number-one cave in Vietnam.

Visitors can walk 11km with more challenges inside Paradise cave if you book a Private day-tour. This Group tour includes 2km walk only because we have to allocate time for other activities. This 2km is following the wooden corridor that local government built-up for tourists in 2011. In addition, you have true experienced trekking with head-lights inside dark in Dark cave.

While Phong Nha cave is too popular, Son Doong is too new to tourist and now under visit restriction from Vietnam government, Paradise cave is just opened partly, Dark cave takes this opportunity to be the Adventure Center of Phong Nha national park.