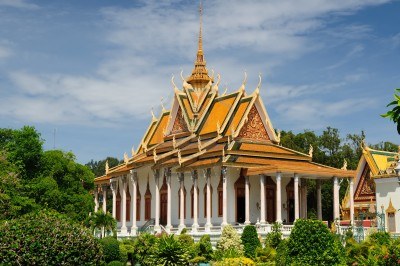 Spice up your stay in Phnom Penh by choosing this Fullday excursion. This packs all highlights of Phnom Penh inside: undeniably fascinating history, featured culture and sampling some local Khmer food.

This Phnom Penh group tour shows you all highlights of Phnom Penh from past to presence.

At around 8 – 8:30am, you’re picked up at your hotel and transfered to visit Wat Phnom, The legend of the founding of Wat Phnom is tied to the beginning of Phnom Penh Capital in the year 1373 by nun Penh (called Daun Penh)

Visit National Museum which was built in 1917, designed  as in Khmer style by French archaeologist. The museum contained Khmer art – sculptures and over 5000 objects are on display in three periods of Pre-Angkorian -Angkorian and Post-Angkorian.

Visit the Royal Palace was built in 1866 by King Norodom and Silver Pagoda were first constructed between 1892 and 1902, Silver Pagoda located in the Royal Palace Enclosure and the Royal Garden, the Silver Pagoda is so named because of its floor, which is made up of 5000 silver tiles, and each tile weights 1 kilogram. The treasures include a solid gold Buddha encrusted and weighing 90kilos

Lunch at local restaurant. In the afternoon, you visit the Independence Monument was built in 1953 and inaugurated in November 9, 1962 to celebrate Cambodia’s Independence Day.

Visit Toul Sleng, Genocidal Museum (S-21) was a high school before the year 1975 and it was used as prison by Pol Pot’s security forces and became the largest center for detention and torture during Khmer Rouge power. Time at leisure at Russian Market, this market became the foreigner’s during the 1980’s when most of the Russian in Cambodia.

The Phnom Penh fullday group tour program can be slightly modified if necessary regarding to flight time or unpredicted issue happens. Anyhow, a replacement activity would be chosen so that the quality and the interest of the journey are not altered.